In the Spring of 2017, ORB Management engaged with the YMCA of the Pikes Peak Region in the initial planning stages of redeveloping its Downtown location. The Downtown Colorado Springs YMCA has been an asset to the community for more than 45 years, serving families from their facility at the corner of Nevada and Bijou since 1972.

ORB, using its  objective approach, worked with YMCA leadership to assess the physical, functional, and financial goals for the Downtown branch, ultimately coming to the conclusion that building a new facility in partnership with an  third-party development team would be the most effective way to achieve their goals. In the fall of 2018, a search process commenced to find the right partner for the YMCA and its Downtown branch.

After initiating conversations with multiple development teams, and accepting proposals from three finalists, the YMCA of the Pikes Peak Region entered a Memorandum of Understanding setting a path forward with White Lotus Group of Omaha Nebraska in July 2019. Their successful proposal utilized creative financing mechanisms that would allow the YMCA to obtain a new facility in a cost-effective structure for the long term, while ensuring there would be no gap in member services. White Lotus Group also brings mission-alignment and extensive experience working with YMCA’s on similar projects. The existing YMCA will continue to operate while the new facility is built on an adjacent, vacant parcel, an overall solution that is sensitive to the important role the YMCA plays in the community.

The plan calls for a 3-phase project that will touch areas of the entire city block. Phase 1 will include the new 60,000 – 80,000 square foot YMCA facility plus 100 – 200 units of mixed income housing at the corner of Nevada Ave and Platte Ave. Phase 2 is slated to deliver mixed-use offerings  with roof-top amenities in place of the existing YMCA facility, with phase 3 utilizing the existing parking lot at Weber and Platte to deliver mixed use and/or office space. 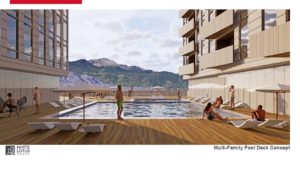 Overall, the plan not only delivers a cost effective, long term solution to maintain a large YMCA branch in Downtown Colorado Springs, but delivers other synergistic uses including housing, office space, and retail offerings that will re-energize the block while creating a great new environment for current and future YMCA members and the downtown community.

Construction on Phase 1 is expected to commence in early 2021 with delivery in 2022. All other phases will be delivered in succession over the next 5-10 years.